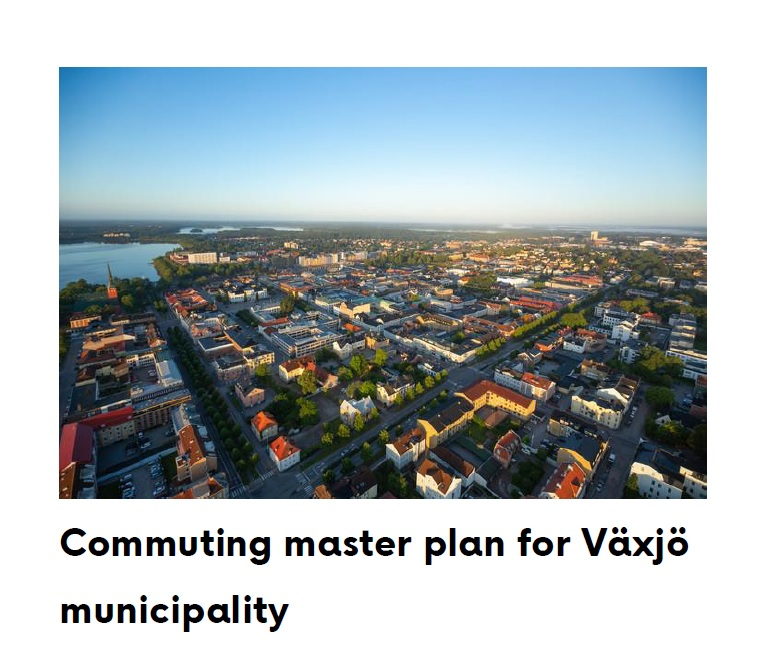 The functional area defined for the new Växjö Commuting master plan (CMP) is Växjö municipality, an area with population of 94 859 inhabitants in 2020 and current annual growth trend of nearly 1 000 inhabitants. The municipality measures a total of 1,914 km2 with population density of 49/km2. By 2050 Växjö municipality is expected to reach 140 000 residents according to its latest development master plan. Located in the southern part of Sweden, the municipality is comprised of the city, small villages and rural countryside surrounded by lakes and forest. Växjö city contains around 70% of the municipality’s population while the remaining are located in villages and surrounding countryside. A large part of the city is in fact shaped by lakes, creating sometimes large separations between neighbourhoods. Much commuting within and to the city runs therefore through the central part of the city.

Växjö’s CMP has been written in parallel with updating the municipality’s transport plan for 2020-2025. Much of the work involving internal and external meetings, surveys, reference groups and other activities involving stakeholders has been connected to the transport plan. This work however has contributed also to writing the CMP, much of which has been partly financed by the SUMBA project.

The two documents differ in that the transport plan follows the municipality’s steering process and document guidelines and will be approved by city council. The CMP is an internal reference document with focus on commuting and according to guidelines from the SUMBA project. In accordance with the SUMBA guidelines, the CMP includes a more detailed background and current status of Växjö’s transport system compared to the transport plan. Different scenarios for development and modal share are suggested along with strategic goals for 2040. Priority and focus areas in the CMP are connected to the transport plan. Lastly, a list of measures is included in the section Action Plan.

Sustainable transportation in the CMP is defined as walking, cycling and public transit because they contribute the lowest negative impact on society and the environment. In this context, the private car is not considered a form of sustainable transportation because of its greater negative impact on society and the environment. This impact can include, among others, demand for land-use with roads and parking infrastructure (per commuter), relative energy consumption (per commuter), impact on human health and attractiveness of urban areas as well as negative impact on traffic safety and perceived safety of other road users. This despite increasing availability and popularity of emission free vehicles such as electric cars and biogas cars.