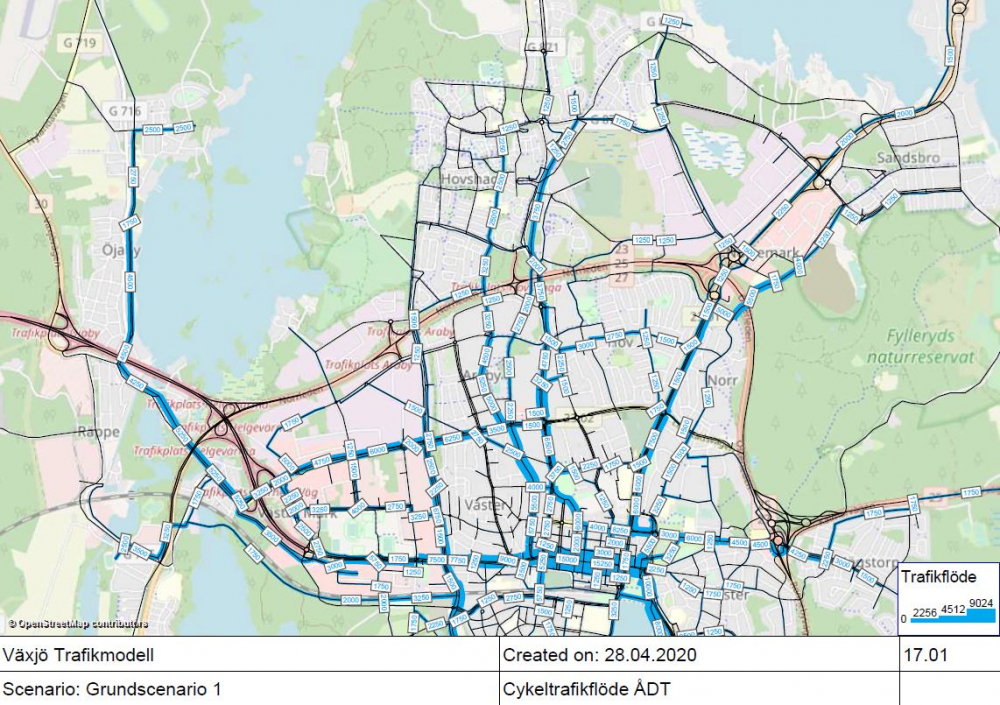 Växjö’s traffic model has received a thorough update since it was built in 2012. The update includes two different forecast scenarios, one for 2040 including population increases, new development areas and planned road infrastructure; and one for 2050 including the addition of some larger highway projects. An interesting observation is that despite increased capacity for cars in both scenarios, congestion will remain a problem as a result of increased travel demand due to population and urban growth and lacking measures for sustainable transport.

To better understand the potential for sustainable transport, the VISUM four-stage model now includes better considerations for public transit and cycling, including an external cycling module that better simulates bicycle trips in the city. With help of the module, Växjö municipality can better identify key cycling routes as well as gaps in the cycling network; new bike lanes can be tested as well as the impacts of limiting car access that would make active transport more attractive. The module uses a special logic, using factors that tend to influence cycling such as time, distance, perceived danger, hills, traffic crossings etc.

The SUMBA team has applied for a project extension that includes additional work in Växjö to test different scenarios for a circulation plan, like what was implemented in Ghent in 2017. The plan would make adjustments to the road network, favouring walking, cycling and public transit for short trips, (around 5 km and under), by limiting car travel between neighbourhoods. Cars travel instead via some type of ring road, in Växjö’s case using the planned highway projects already mentioned. With the help of the model, Växjö’s traffic and urban planners can better understand potential outcomes and risks with such a plan even before shovel meets the ground.