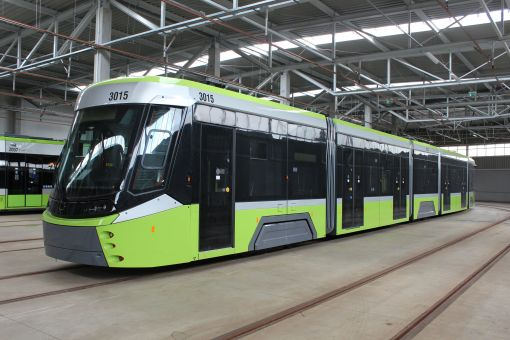 The tramway reintroduced to Olsztyn in 2015 has changed the whole transport system in the city. The track running from a big housing area to the main station, with two branches reaching the city centre and the university area formed 3 tram lines. In fact, that was only the beginning of the transport revolution. A new track leading to
another big housing areas will complement the main network, offering two new tram lines for more passengers.

Although the pandemic situation in 2020 caused some problems with project implementation, it was possible to reach the next stage. The new rolling stock – Durmazlar Panorama – came from Turkey in February, a bit earlier than planned. Luckily, the construction approval procedures started before the pandemic outbreak and were finished in July 2020. Now a technical approval is still necessary but when it is accomplished, the tram will be ready to operate. Due to the disease situation in Turkey, the next 5 cars will come to Olsztyn with a few months’ delay. However, a relevant annex to the delivery contract has already been signed.

Moreover, the tender for the investment part of the project (a 6-km track for the next two tram lines and a new configuration of one of the end stations) has already been awarded. Olsztyn is going to pay ca. €90 million for these works. The winning consortium is obliged to complete the work within 26 months after signing the contract. It is possible that the main tram network will be ready to operate within two years. There have been planned also some additional branches which may be built within subsequent investment stages.

What is interesting, the Olsztyn PT fleet’s lime-silver-graphite livery gets increasing recognition all over Poland. The neighbouring municipalities obviously use this colour set as well – for better visual coherence of the FUA public transport. What is more, further towns and cities (e.g. Ostróda and Piła) get inspired by this fresh and optimistic look of Olsztyn trams and buses.