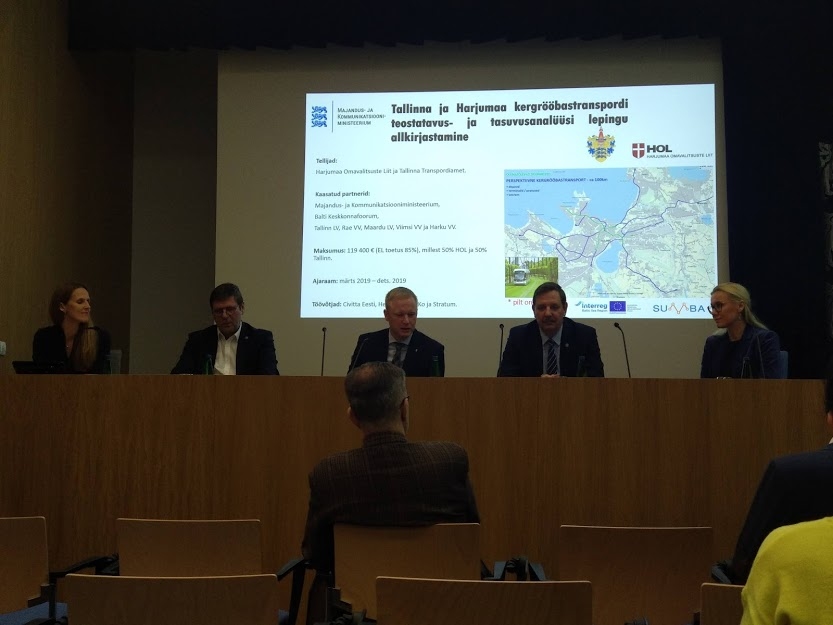 Union of Harju County Municipalities and Tallinn Transport Department have signed the contract for the feasibility analysis and cost-benefit analysis for the light rail transport in Tallinn and Harju County that will be carried out during the SUMBA project.

The importance of light rail transport was emphasized by the Minister of Economic Affairs and Infrastructure Kadri Simson and the Mayor of Tallinn Taavi Aas. "In order to fulfill our environmental promises [to reduce greenhouse gas emissions] we need to use more sustainable modes of transport. And trams are one of the most sustainable," said Kadri Simson. "Approximately 160 000 cars commute every day between Tallinn and Harju County and that number is predicted to increase every year by thousands of cars. Expanding public transport is the only solution," stated Taavi Aas.

The contract for the feasibility analysis was won with a joint bid by Civitta Estonia, Hendrikson & KO and Stratum OÜ. The exhaustive analysis will study among other things the possibility and potential routes for light rail traffic between Tallinn and Harju County.

News
This year the Civitas Forum, one of Europe's top sustainable urban mobility events that annually

News
As a part of the SUMBA project, Växjö municipality will be updating and developing its transport

News
This is the best time to promote the SUMBA project in the Baltic Sea Region. Autumn opens the

News
In recent years, technological and social forces have pushed smartphone applications from the fringe